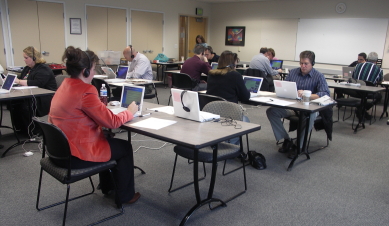 NwETA develops training and testing software that is effective with people from all cultures and at all organizational levels, including those with no computer experience or education.

We are committed to producing superior computer-based training and testing software that is effective with every person in an organization, including those with little or no education or computer experience. We meld occupational safety and health training with wellness, well-being and skills training. For safety and health information and skills, every person must be effectively trained to criterion, and that is our goal in every training experience. Our BARS assessment software is similarly aimed at the entire range of people who might be exposure to neurotoxic chemicals, especially those with limited or no education.

Northwest Education Training and Assessment (NwETA) was formed by our present staff (Anger, Rohlman, Eckerman, Storzbach) as a limited liability company (LLC) on February 14, 2002, in Oregon. The company was initially formed to develop and market our foundation software product, named cTRAIN. It fills a gap in the training software: Simple, intuitive, usable by non-programmers, focused on training those with little or no education without intervention by a trainer.

cTRAIN
We developed cTRAIN as prototype software in 1999-2000 through funding from the Center for Research on Occupational and Environmental Toxicology (CROET) of Oregon Health & Science University (OHSU) and a training grant from Oregon OSHA. With this support, we developed respiratory protection training for the Portland District Council of the International Union of Painters and Allied Trades (IUPAT). That training is still in use today for all IUPAT apprentices in Portland. Subsequent grants and contracts are listed under Projects.

Initial Goal (cTRAIN)
NwETA’s initial goal is to commercialize cTRAIN software in order to maintain and evolve a training program from it’s then prototype status by obtaining external funding. After comparative testing, we selected Revolution as our software platform because they committed to modify their software for new or modified operating systems (Windows, Macintosh, UNIX, internet browsers) since this would relieve us of a burden that had starved our testing software development in the past.

We obtained a phase I small business grant (technically, an STTR) from the National Institute for Environmental Health Sciences (NIEHS) in September, 2004. That grant provided substantial funding for programming that allowed us to complete the writing of cTRAIN 2.0. Oregon Health & Science University granted NwETA an exclusive license to market cTRAIN in August, 2005, and declared NwETA an OHSU spinoff company.

Our programmers delivered a beta copy of cTRAIN 2.0 in January, 2006. The remainder of 2006 was devoted to pilot testing and revising cTRAIN 2.0. Our first large-group training exercise using cTRAIN 2.0 was a 4-day 1100+ screen program on Pesticide Applicator Skills and Safety, in November, 2006. A fully functional cTRAIN 2.1 was delivered in September, 2008, and is in use today in multiple projects and organizations.  It is available for licensing to develop content or use the content we have developed (see Projects).  The cTRAIN program, now in version 3.0, remains in active development as we add features and new licensing plans.  cTRAINweb, delivered in 2012, provides training on major browsers on the internet.  Licensing fees for cTRAIN are applied to the development of the cTRAIN platform.

cTRAIN Editing Program
We developed an editing tool for cTRAIN to allow NwETA to create training, named BuilderJr. We completed cTRAIN Builder, a commercial level editing program (leaving our Builder Jr. tool behind) that allows our company to scale through the purchase and use of cTRAIN 3.0 by other content developers and to meet our goal of providing a simple, intuitive training program that non-programmers can use to develop and teach their own content.  Builder is available with a cTRAIN license.

BARS
In June 2007, NwETA signed a licensing agreement with OHSU for the exclusive rights to market BARS, the Behavioral Assessment and Research System, which the NwETA principals developed, beginning in 1990. BARS was developed to test groups exposed to neurotoxic chemicals, such as pesticides or solvents, by comparison to unexposed “control” groups. This agreement has allowed NwETA to re-write the BARS program to run on Windows computers through a generous donation of programming time by an investor who wished to remain anonymous.  BARS 4.0 consists of 10 basic tests with the reporting software to be completed in 2012, at which time we will commission the creation of new tests. As of January 1, 2010, NwETA took over the ongoing cost of programming BARS.  Licensing fees for BARS are applied to re-writing, expanding and testing BARS 4.0.